Excerpt and Giveaway: Borrowing the Doctor by Victoria Pinder 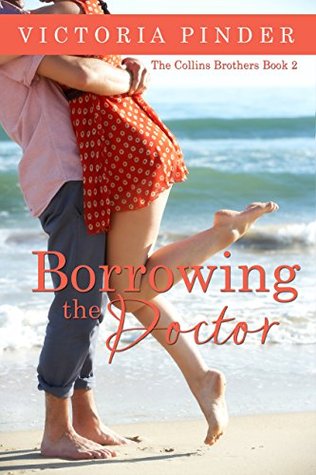 Party girl. Art thief. All around bad girl. It’s what all the newspapers call socialite and heiress Kate Sparrow. It’s all untrue. Kate’s been set up and she’s following the orders of the FBI to get the real criminal, her father. She’ll have to put up with her sister, the wedding fiasco, and her own fears that someone is after her, trying to stop her to get what she needs to prove her innocence.
Doctor Daniel Collins joins his brothers on a cruise to the wedding of his young cousin. His cousin begs him to keep a close watch on the bride’s sister, Kate. He’s to keep her from ruining the wedding.
Kate doesn’t trust Daniel’s help in her life, but the man’s interference is blocking a few problems. She lets him. After all, he spent a few years in the military and having a friend like Daniel is nice. But when her fears become true, someone is after her, pretending to be in a relationship with the sexy doctor has its benefits. What she hadn’t planned was opening her heart to trusting him. But if she doesn’t open up, she’s going to lose out on far more than her life, she’d lose out on love.

Kate bit back a groan. Her sister had horrible habits. She came here to provoke her, not play the victim card. Kate was on to the game of cards.

Unable to find another solution, Kate played her role. She sipped her drink, rolled her eyes, and turned toward the waitress. She ordered another drink. She gazed into the ember eyes then turned back toward her sister.

Stephanie crossed her arms. “You haven’t touched your drink.”

Kate left her almost-full glass of wine at the table, stood up, and walked toward the patio bar. Hotels on South Beach seemed to have a bar station everywhere.

“I’m not finished speaking . . .” Her sister grabbed her arm. Something stirred the man behind her. A second later, Stephanie let go. Then without one look back, Kate’s arms had goose bumps.

Whatever he did had paralyzed Stephanie. Muscles and height worked for him. Six foot three and a body of an action hero. The hot Collins man smelled good, too, almonds and the forest mixed together.

Slowly, she turned and stared into those ember eyes. Kate winced. She might not fall in love, at least not real love, but this man’s bed would be heaven.

A snort almost bubbled up in her throat as she walked away and never turned back.

A few feet away, Kate heard her sister’s voice.

“My sister and I are in a private conversation.”

Kate turned and stared into yet another mirror. Stephanie had folded her hands like in prayer. Was she joking?

Kate shrugged, walked back, and pasted on a simper to match Stephanie’s tone. “Me and my sister are in a loving, sweet conversation, sir, and it would be best if we could get back to it.”

She’d need to be rude? Kate stood next to him and had no idea what to say. The man leaned down next to her face. Kate’s blood pressure shot up. What had he planned? She wouldn’t kiss him. Ever. Her brown eyes stared at his in wide-eyed wonder. The man then told her sister, “Stephanie, go back to my cousin. I’m here to talk to Kate.”

What could she do? She had no idea who this man was other than his last name? She fixed her hair behind her ear, and Kate pretended to be experienced with worldly knowledge.

Stephanie then stomped away, and Kate shook her head, “We’re not kissing. I don’t know your name.”

His head shot back, and he laughed. “A kiss?”

“I assumed you were here to seduce me.”

A warm liquid desire built inside her.

He took a step back then told her, “Daniel. I’m Daniel Collins.”

“I’m . . . Kate Sparrow.” At least she could speak in her normal tone now. She sighed. It took longer than normal, but the man’s presence overpowered the room, at least to her.

He shrugged. “You’re far prettier in person than in the newspapers.”

“Figures.” Reality crashed on her shoulders. Notorious Kate Sparrow meant fun, a meaningless flirt, and a chance to be in the newspapers. Guys were not interested in her or the inner spark that made her special. The wind knocked out of her sails, proverbially, or whatever that word was. A bile of distrust in her stomach lining returned. “Go away now.”

She stood back up and walked toward the bar. The waitress took too long.

He followed her and handed her the wine glass. She bit her lip. She ought to ditch this one fast.

“Princess, I meant that as a compliment. You surprised me.”

“What a line. Don’t be insulting and call me princess.” Kate downed her drink, and her nostrils flared. Her father hated her. Her sister ran a game that meant it was okay to stab Kate in the back. Men treated her like she was someone else. The lockbox had to explain how this all related to her mother’s company. She signaled for that other drink. Without one glance in his direction, she told Daniel, “I’ve heard better, now run along.”

She took a seat in the barstool.

“Kate, we’re both going to the wedding.” At least his voice came from above her and not nearly so close. Her body hadn’t cooled down. The wine burned her throat. Daniel then told her, “Everything will be better if we get along.”

Kate swiveled her chair, ready for battle now. “Better? My life hasn’t been better in years, so get lost. The only numbing thing left in my life is a good, stiff drink, and I’ve not had nearly enough of them to find you the least bit attractive.”

Strike. Dang. Somewhere along the path, she’d became hard and bitter. Daniel Collins’s dark eyes read shocked. She glanced back at the new glass of wine. His tall muscular frame and presence took control of the room, but his eyes read sympathy and understanding. His words were different. Was his empathy part of his game? Did any women say no to him? Kate guessed this man must get what he wanted, when he wanted it. In a different life, she’d have been a shy musician that steered clear of men like him. She picked up the wine, but dared not drink.

Kate Sparrow was the heiress to a shoe fortune. So why hadn’t all her money taught her how to act in front of a man?

Victoria Pinder grew up in Irish Catholic Boston then moved to Miami. Eventually, found that writing is her passion.

She always wrote stories to entertain herself. Her parents are practical minded people demanding a job, but when she sat down to see what she enjoyed doing, writing became obvious.

The Zoastra Affair, Chaperoning Paris, Borrowing the Doctor, and Electing Love, Mything the Throne and Favorite Coffee, Favorite Crush will be published in 2014.

Now she is represented by Dawn Dowdle of Blue Ridge Literary Agency.

Also she’s the Vice President for the Florida Romance Writers. Her website is www.victoriapinder.com.