The Sidewinders Box Set, Vol 2 by Kat Mizera is NOW LIVE!!!
Only 99c for a limited time – for FOUR BOOKS! 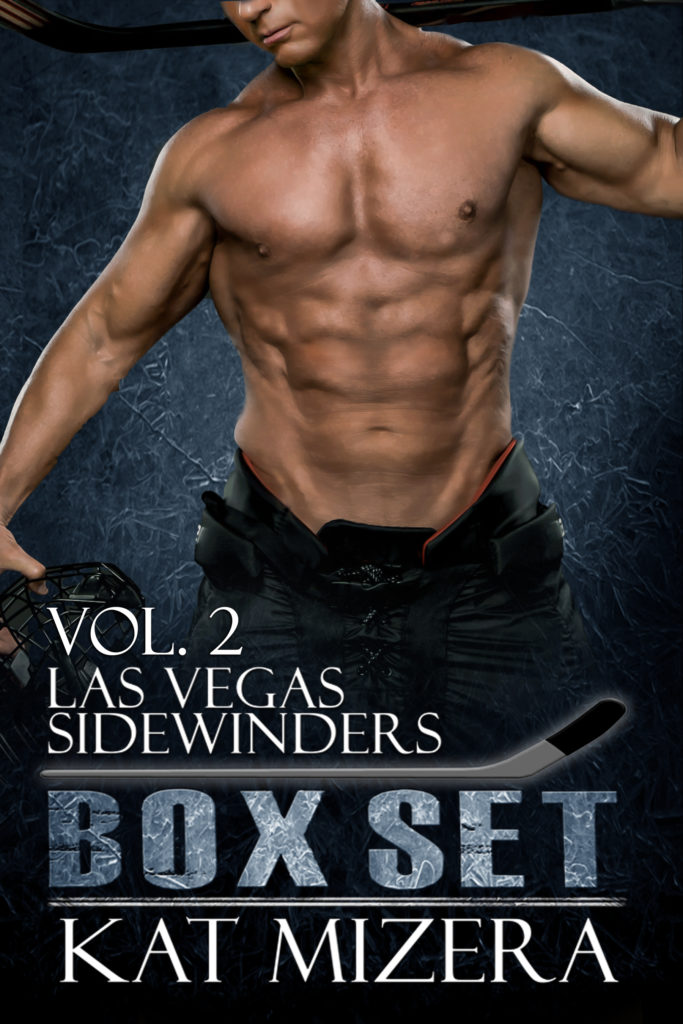 Anatoli “Toli” Petrov is at the height of his career—and unexpectedly single–after earning a spot on a new NHL expansion team in Las Vegas. But navigating the dating world is a totally foreign experience for the sexy Russian hockey player.

Tessa Barber is also suddenly single after her husband blindsides her with divorce papers. A spur-of-the moment trip to Las Vegas is just the thing she needs to take her mind off her troubles.

When an awkward encounter in a bar leads Toli and Tessa into a week of genuine passion, things become more complicated than they ever imagined. Keeping score has never been such a dangerous game!

Zakk Cloutier is young, hot, and likes the ladies that are drawn to his bad boy image. The problem is that none of them make his heart race the way the tall, redheaded widow of his late coach does. She’s the one woman he’d consider settling down for.

Tiffany Marcus feels like her life is crumbling around her. A widow with two young children, she wants to find some semblance of sanity again. Focusing on her three-year old twins leaves little time or energy to deal with the aching loneliness after her husband’s sudden death. So she’s shocked when she starts to feel alive again–thanks to the helping hand and broad shoulder of one of the Las Vegas Sidewinders.

Skating on thin ice takes on new meaning when the past catches up to them. With more than just love on the line, Zakk has to make an impossible choice: Step in and be the man Tiff needs him to be, or let her go to save himself.

After a whirlwind romance, Las Vegas Sidewinders forward Anatoli Petrov is about to make Tessa Barber his wife… or is he? When someone with an axe to grind shows up and wreaks havoc on their special day, events unfold that make the love of his life wonder if he’s the man she thought he was.

From the bright lights of Las Vegas to the cold streets of Moscow, Toli and Tessa become embroiled in a complex and terrifying web of deceit. Tessa isn’t sure who to trust – including the man she loves. Toli doesn’t know what’s going on with Tessa, but before he can fix things with her, he has to figure out how to keep the situation in Russia under control. Will they be able to figure out the truth or is it a game misconduct for them both?

Mackenzie Riser is one of the top plastic surgeons in the U.S. and has a wonderful, fulfilling career in Chicago. As she counts down to her 50th birthday, she realizes she needs more than work to satisfy her.
37-year-old Rob Rousseau is devastated with the news his 16-year-old daughter has breast cancer. As he struggles to help her come to terms with losing her breasts, the new plastic surgeon is the first woman since his divorce to make his heart beat a little faster.
As Rob and Mack navigate unfamiliar territory, there’s one little thing that might come between them–something they never expected. Do people ever really get second chances?