Brace yourself for ALL THE FEELS.
Keep reading for an excerpt from Tainted: Lance & Mary by USA Today bestselling author Tess Thompson!!! 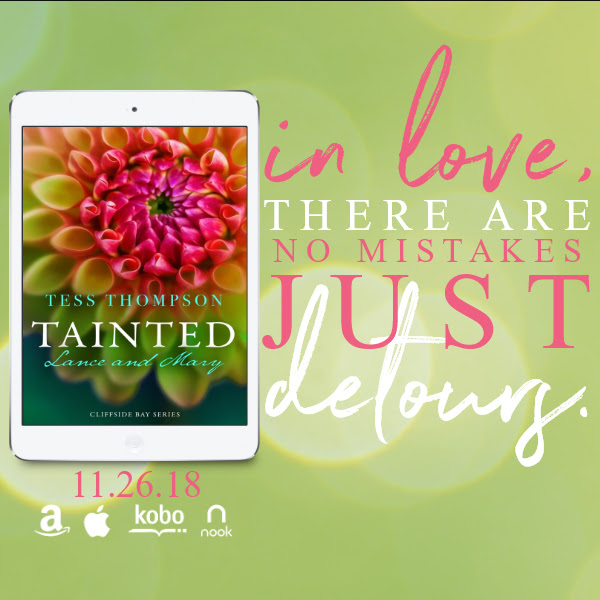 One career-ending mistake sends Lance Mullen home to Cliffside Bay in search of a fresh start. And in no time at all, home begins to feel like the place he was always meant to be. With his beautiful new beach house, his friends and family close by, and a profitable business to grow, life really is good. That is until his heart tries to wreck everything… again.

After losing her mother, child and marriage, Mary Hansen has built a nearly impenetrable wall around her heart. She’s convinced her dream job, a few growing friendships, and a never-ending stream of books to fill her evenings are enough for a contented if not all together joyous life. Though she’s on guard not to get too close to anyone, one careless moment with Lance will shatter her prospects for an uncomplicated future.

The fifth installment of The Cliffside Bay Series by bestselling author Tess Thompson follows the interwoven stories of five best friends, the beach community they love, and the women who captivate them. Prepare to get lost in a wave of small town charm, men you would love to take home to your mother, and smart, resilient heroines you wished lived next door. 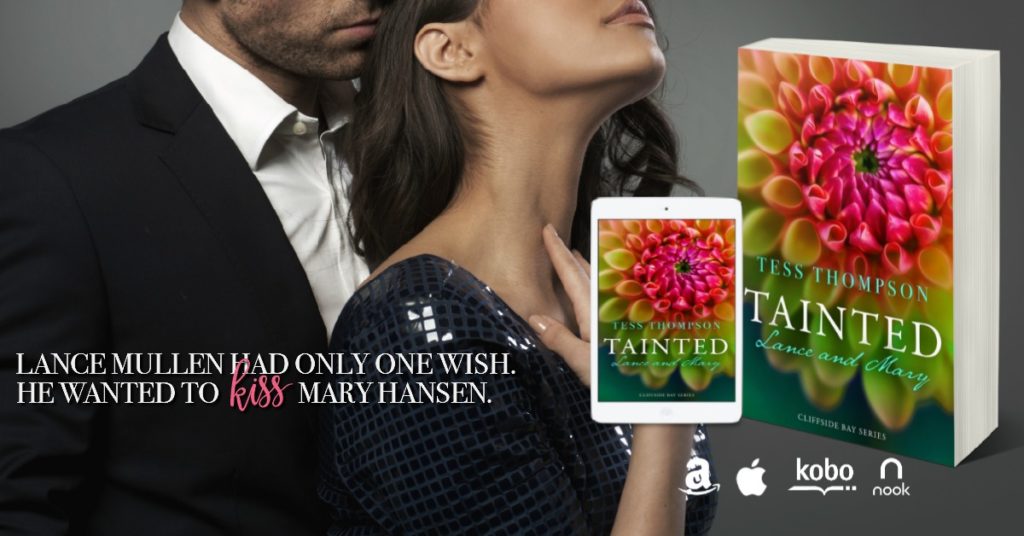 CHECK OUT THIS EXCERPT:

Ten seconds before the clock struck midnight and tossed them into a new year, Lance Mullen had only one wish. He wanted to kiss Mary Hansen. Not a friendly peck on her alabaster cheek or a chaste brush of lips. No, his kiss must steal her breath and quicken her pulse and weaken her knees. He must make her swoon.

This was not a task for the shy or meek. Only a hero could rouse her from her half slumber.

It would take the kiss of the greatest love story ever written.

Around him, his friends began to chant the countdown.

Mary stood next to him in Zane and Honor’s crowded living room. All night she’d stayed near, so close he could smell the subtle scent of her perfume and bask in the heat that radiated from her skin. She tugged the sleeve of his jacket.

“Lance, you have to count.”

He looked down at her. His pulse quickened, his knees weakened at the mere sight of her. With an oval face and one of those well-defined jawlines he found so attractive, she reminded him of fine china, meticulously honed into beautiful lines and curves. Tonight, she wore a dark blue velvet dress that clung to her slender waist and hips. Her caramel-hued hair was swept up into a pile on top of her head, exposing her long neck, the tips of her delicate ears, and the birthmark on her neck that reminded him of a question mark. All evening he’d longed to trace the birthmark with his finger as if it might unleash the answer to her heart. Yet, he wondered, too, would she shatter under his touch?

She played with the gold bangles around her wrist and counted down the seconds with the rest of his friends. Seven, six…

She smiled up at him with eyes as dull as a child’s crayon. Five, four…

One day she’d told him that all interesting characters in novels have a secret.

He was in love with Mary Hansen. No one knew, not even his best friends. She was tainted in their eyes, prickly and cold.

Unlike a hero in Mary’s favorite novels, his secret did not make him interesting. More like pathetic.

Confetti floated and danced around him. “Auld Lang Syne” played from the speakers. His best friends and his brother kissed their wives—everyone married now but him. Maggie and Violet were pregnant. He knew his sister-in-law, Kara, wouldn’t be far behind. He was ashamed that their happiness made him sad. More than it should? Maybe. Was he wrong to want a love of his own? A woman to cherish and dogs and babies and the busy, messy lives his friends had made for themselves? If it was wrong, if he should not yearn for more when he had so much, then he was guilty. His new house and all the money in the bank and his expensive cars and clothes meant little when you woke up alone.

He wanted to wake up with Mary Hansen.

The passage into her heart was as mysterious as the Agatha Christie novels she lovingly displayed on the Staff Picks table of their bookstore. That said, he knew more than most about the damaged beauty by his side. During their late nights of easy friendship, she’d slowly revealed herself to him as they prepared to open the revamped bookstore. The plot? Six years ago, her baby daughter had died, followed closely by her mother’s death. Then, her husband had admitted to having an affair while she was pregnant. The subtext? Trained as a librarian, she lived only in the pages of the novels she coveted. They were her link to the living world.

Mary turned to him and played with the collar of his shirt. “Sir Lancelot.”

“Yes?” She labeled everyone by characters in books. He was Sir Lancelot. Every time she called him that, his heart fluttered. However, she was not his Guinevere but his Sleeping Beauty. If only he could waken her.

“You’re supposed to kiss me or it’s bad luck.” She held up her cheek.

This was his chance. Do it. Be bold.

“I’m not sure that’s true, but just in case, you better do it.” She pursed her lips, playful.

She was about to know he was not playing.

He pressed his lips to hers, not hard like he wanted but with just the slightest of pressure, and kissed her. To his surprise, she softened against his mouth. She kissed him back! Yes, there was no question.

Her lips moved, mimicking the flutter of the confetti that tickled his ear. He lingered at her mouth, lost. My God, she tasted of champagne. Another stanza of music passed. Still, he could not let go. He slipped one arm around her waist. She kept her arms at her sides but allowed him to pull her small-boned frame against his broad chest. Overwhelmed by the scent of her perfume and her hair, he kissed her harder. A spark of light exploded behind his eyes. An engine rumbled through his stomach.

She pulled away, flushed and breathing hard. “What was that?” she whispered. 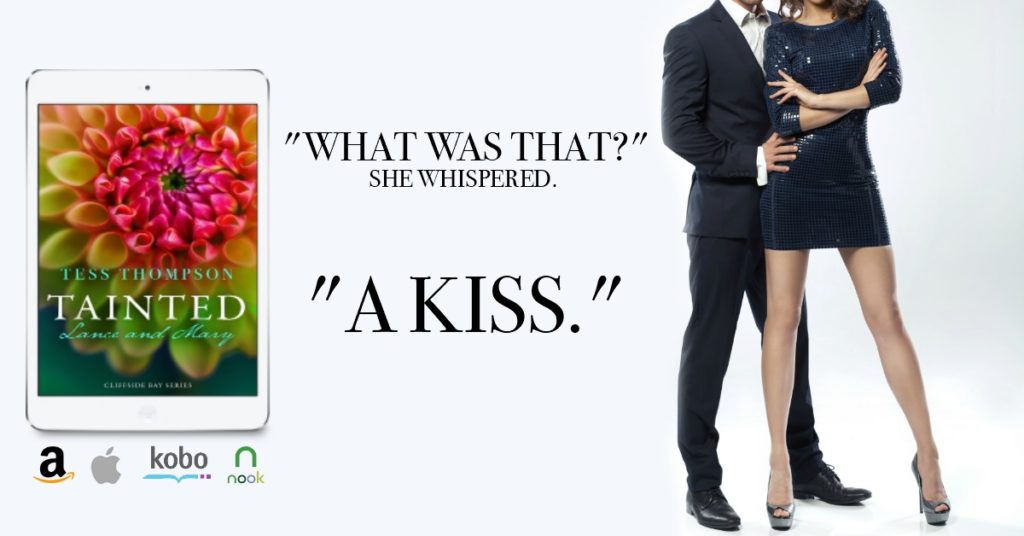 Like most of her characters, Tess Thompson hails from a small town and will always feel like a small town girl, despite the fact she’s lived in Seattle for over twenty-five years. She loves music and dancing, books and bubble baths, cooking and wine, movies and snuggling. She cries at sappy commercials and thinks kissing in the rain should be done whenever possible. Although she tries to act like a lady, there may or may not have been a few times in the last several years when she’s gotten slightly carried away watching the Seattle Seahawks play, but that could also just be a nasty rumor.

She currently lives in a suburb of Seattle, Washington with her brand new husband, the hero of her own love story, and their Brady Bunch clan of two sons, two daughters and five cats, all of whom keep her too busy, often confused, but always amazed. Yes, that’s four kids and five cats. Pray for her.

Release Boost: More or Less a Temptress by Anna Bradley