Armen Jettison possesses a human soul. No big deal, right? Except for one thing, Armen is a sex demon, and demons should be soulless. Centuries of fighting his inner evil have left him tired and starved for some naughty action.

When his leader offers him a mission to Anchorage, Alaska, to rescue a female threatened by his enemy, he jumps on the next flight. In an Anchorage tavern, he finds insecure, cynical Ariella Segreti. Not only is she the threatened woman he seeks but his Soul Tie, the only woman able to tame his unruly demon. Well, he did crave some naughty action. Now, he has a mate, a mysterious child, perilous old enemies, and enough adventure to send them all running for their lives.

When the danger finally catches up to him, Armen must put aside old loyalties, forge new ones, and tackle the most difficult challenge of his existence—winning his stubborn Soul Tie’s heart.

A vampirelike soul demon succubus?! Oh sweet fuck, I am totally in. I’m not always drawn to paranormal romance, but this book absolutely did it for me. It’s like an adult twist on Twilight and I loved every second. Armen is not only completely fuckable but he’s also easy to fall in love with. From the second that he catches the sweet scent of his Soul Tie, Ariella, he knows that no other woman will ever satisfy him. However, things are complicated by the fact that he’s there to protect her and her daughter, Katie, from the evil demons that are searching for her.

Ariella’s taken off guard when she first locks eyes with Armen. Her body betrays her by compelling her to draw him closer while her mind is blaring alarms that this is too soon and too fast. Her ex-husband already destroyed her self worth and she is damned if she’s going to let down her walls again for the same thing to happen. Once bitten, twice shy and all that. [hehe].

But the fight within her is short lived. Armen is dedicated to show Ariella that he’s not only the man for her right now, but also forever. He could use his compulsion to seduce her, but he refuses to do so – thus making me fall for him even more. There’s a ton of danger as demons are lurking around ever corner, and an enormous about of sexual tension that bristles in every scene.

This book is a hot and delicious romance full of fangs, demons, angels and a whole lot of sex. KD ties up the loose ends necessary to give you a feeling of completion in this book, but also leaves some questions for other characters, which makes me really excited to see how the storyline will play out. If you’re in the mood to be swept away to another world while staying in this one, Soul Tie Seduction will more than satisfy your craving. 4.5 stars! 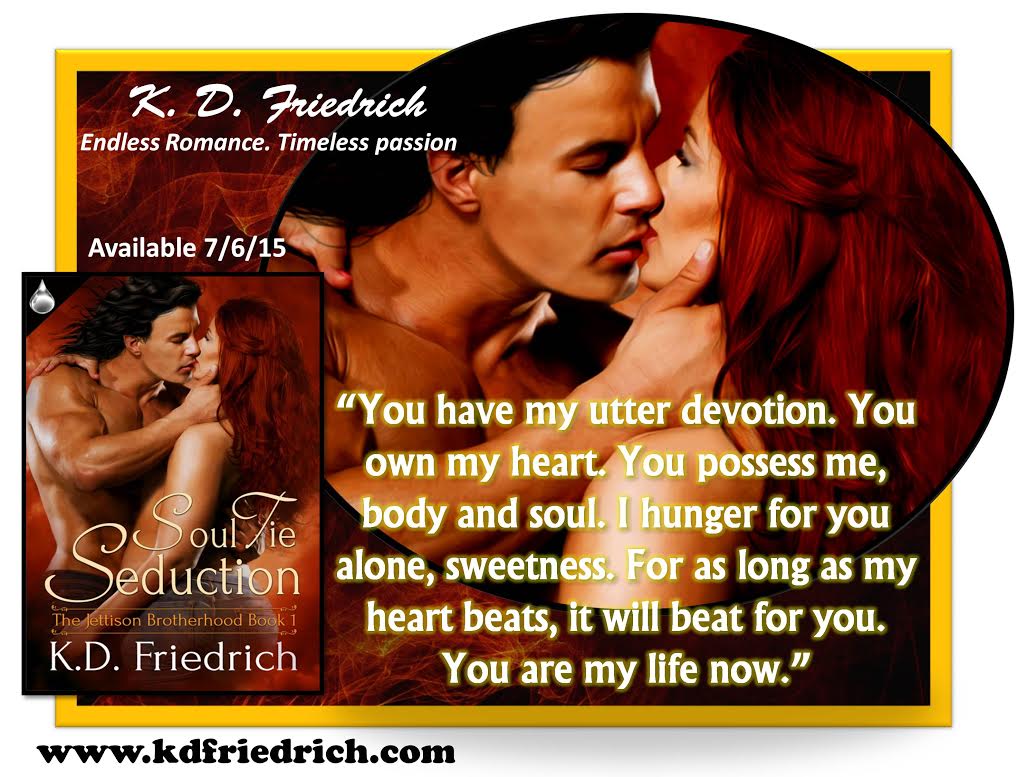 A large piece of her soul rested with him in that bed, a part that would have vanished forever had his prognosis taken a horrible turn. A few weeks ago, she would have never allowed herself to fall this fast for someone. She would have blamed her intense devotion on nothing more than compassion for another human being’s suffering, but despair this rampant went well beyond such a simple explanation. Somehow, Armen Jettison had found the door she’d sealed shut with mistrust and apprehension and ripped the damn thing off its hinges. Once content living a life of loneliness, she now found herself wondering—what if?

What if she accepted this man into her life?

What if she opened her heart to him?

What if she dared to take a risk?

Yes, she lusted for him, desired him with everything in her, his hands on her body, his lips on her skin. Ariella didn’t have an issue accepting Armen into her body. In fact, she wanted him rock hard and buried to the hilt deep inside her. She groaned. Pain riddled her body as if she lived through a ten-car pileup, and still she wanted him to jump out of that bed and take her.

Nope, her sexual desire for him wasn’t up for question. Her issue was the growing adoration warming her very soul, and at the same time, making her shiver with the cold reality that sex wouldn’t be enough.

She wanted more, and it scared her to death.

She covered her face with her hands, shaking her head. The possibility of never seeing Armen again, of walking away from the one man who held her child as his own, who faced a blade twice so she may live, left her with a frosty ache in her chest.

K. D. Friedrich is a writer of Contemporary and Paranormal Romance. By day, she crunches numbers, but by night, she’s busy creating interesting worlds and compelling characters, hot alpha heroes being her favorite. In 2013, she placed second in the Golden Palm contest for Paranormal Romance. She’s an overprotective mother (her daughter’s words), lifelong New Yorker, and an obsessed reader of everything romance.

Blog Tour: Badass In My Bed by Rae Lynn Blaise