Keep reading for an excerpt from Chasing Her Lion by Golden Angel!
It releases April 1st!!! 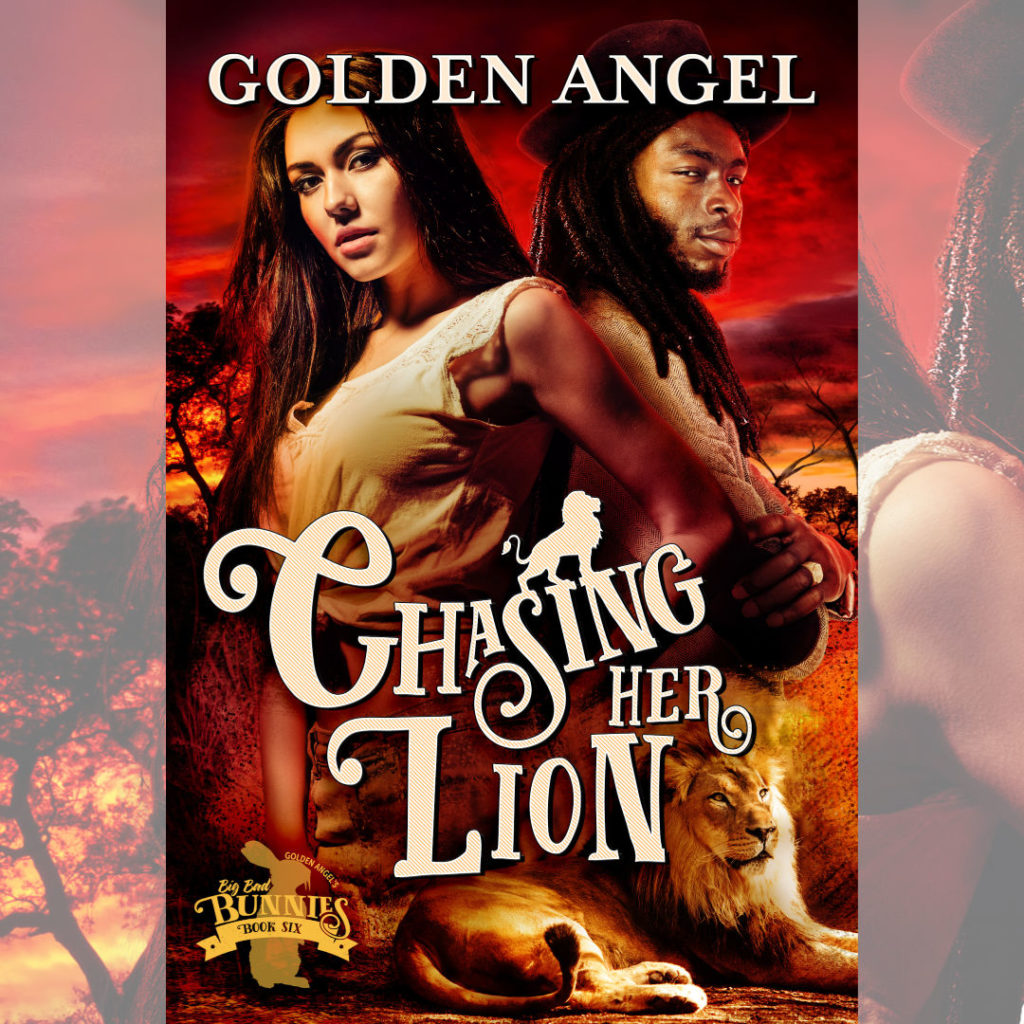 PREORDER TODAY FOR ONLY 99¢:
Universal — https://books2read.com/u/mv59vJ

Sometimes all a lion shifter wants is a snuggly bunny to cuddle. And Kasim has been stalking his very kissable prey with the patience of a true hunter. But as the perfect moment to pounce arrives, life throws some obstacles in Kasim’s path and his hopes for something more with a certain some-bunny are dashed quite possibly forever.

The last of her siblings to find a partner, bunny shifter Bailey Bunson has been waiting for her fated mate. But when her dream of predestined love is ripped from her grasp, Bailey fears she’ll never know her own happily-ever-after. That is, until she realizes the unassuming lion shifter who’s been by her side might not be her fated mate, but is everything she’s ever wanted. Will it be too late for Bailey and Kasim? 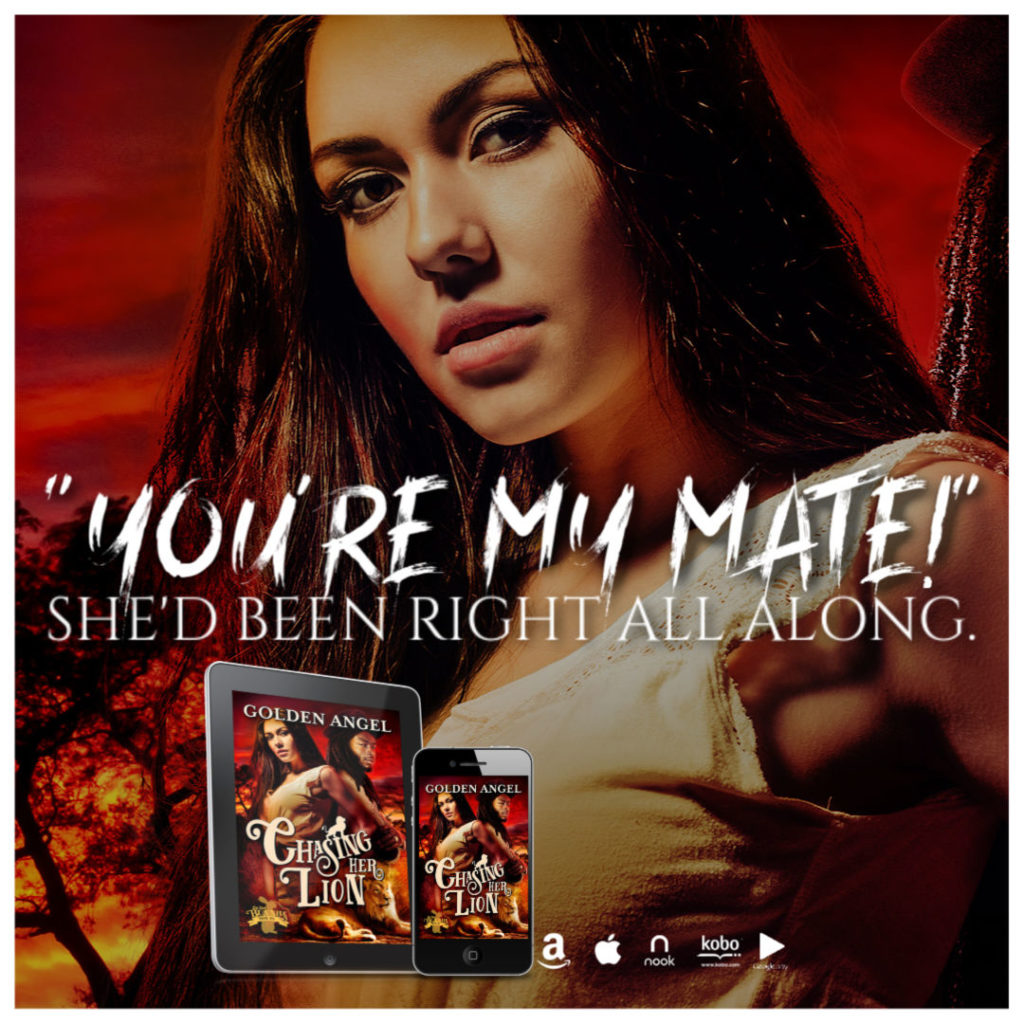 For weeks, he’d been sidestepping actually making love to her, even though she’d indicated she was more than ready. He wanted it to be special, memorable—unforgettable.

As if I am forgettable. His lion sniffed, tossing his mane with derision. Confidence was one thing his animal side didn’t lack.

“You look amazing,” Bailey said, stepping back from Rana.

They both did, but Kasim was obviously far more interested in what Bailey was wearing. The lacy purple dress hugged her curves and had a very high slit up the side of her left leg that made Kasim want to get on his knees and go exploring.

They switched sides, so Bailey could hug her brother, and Kasim dropped a kiss on Rana’s cheek. He was glad to see her so happy—she deserved it.

As Brice and Rana moved away to circulate among their guests, Bailey’s hand dropped down to squeeze Kasim’s butt, and his cock jerked in interest. Raising his eyebrows, he looked down at her.

“What?” she asked, summoning up an amazingly innocent expression, especially considering she hadn’t moved her hand. “Your suit jacket is long enough, no one can see what I’m doing.”

“I know what you’re doing,” he admonished. Not that he minded exactly, but it was hard enough trying to keep his urges under control—especially with the plans he had for tonight—but they couldn’t leave the reception yet. It would be rude to sneak out this early.

Giving him one more squeeze, Bailey stepped forward and grabbed his hand instead. “Come on, I want some ranch!”

Chuckling again, Kasim followed her to the ranch fountain.

She was loading up her plate when Fred, one of his pack members, came up with a question. Kasim was so busy chatting with him, he almost didn’t notice when Bailey stepped away—and not toward the food—toward another man. Kasim glanced at her and frowned when she took another step away from him. He couldn’t see her face.

Another step and Bailey reached out, grabbing the man by the shoulder. Kasim froze. She wouldn’t ignore him like this. Wouldn’t grab another man, a stranger, unless…

“You’re my mate!” Her voice was high and shocked and tinged with joy, and it cut through Kasim’s chest like a knife. Stabbing him couldn’t have been more painful.

He stepped back, rocked by the pain. In his head, his lion went wild, clawing to be let out, to get to their bunny, to sink his teeth into her, and claim her before this usurper could steal her.

But he wouldn’t be stealing her, would he? He was Bailey’s mate. The happy ending she’d insisted she wanted from the moment Kasim had met her. Kasim had been the one to tell her how unlikely it was—how unrealistic.

He’d thought she was just immature, ignorant—childishly hopeful for a fairy tale.

She’d been right all along.

Silently, Kasim stepped back and melted into the crowd, moving as quickly as he could. If he stayed there for one second longer, while Bailey and her newfound mate stared at each other, he wasn’t sure he’d be able to control his lion.

His lion roared with pain as he fled.

Release Blitz: Bound to Them by Lia Davis