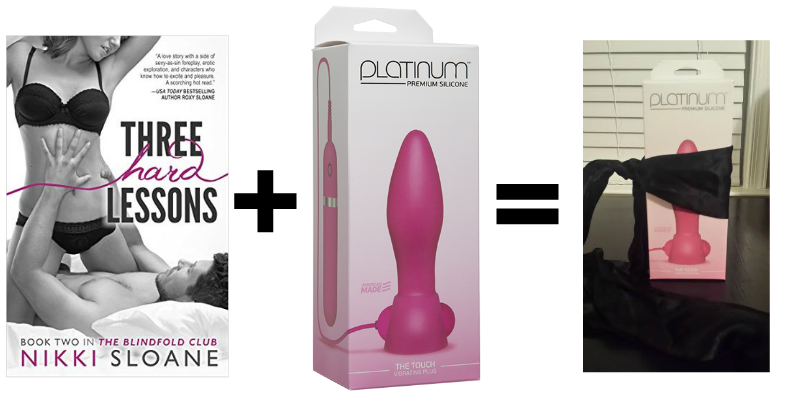 What am I pairing?

Why Am I pairing it?

I could just state the obvious and say that I’m pairing it because the characters in THREE HARD LESSONS use a pink plug. Even though the one in the book doesn’t vibrate, it’s still a pretty fucking close match. But despite that apparent reason, that’s not entirely why.

I was one of those people who laughed at stories of travelers whose vibrating sex toys make an appearance and cause a scene at security. I thought, ‘Really?! Did you really need that toy so badly that you had to bring it on vacation with you?’

Now I know: if they were bringing this vibrating plug with them, then yes, they so so so did. Just label me a Sex Toy Traveler, because ohmygod this butt plug is coming with me everywhere. If it was socially acceptable to walk around the grocery store with this plug vibrating in my ass, I would.

Let’s talk specifics: This plug is about 4 inches in girth (at the widest part) and 4 inches in length. It feels squishy and it’s pretty bendable, as silicone does. I adore that stuff.

Now that we have the specifications out of the way, let’s discuss what you really want to know.

When comparing it to jelly-like plugs or metal/glass plugs, I liked this one a lot because it molds really nicely in your body. I used a silicone based lube with it [thanks DocJohnson!] and had zero issues sliding it home. This plug isn’t massive, so don’t be afraid. It’s actually pretty perfect for someone just starting to explore their backdoor but I think it’s also great for someone a little more advanced looking for a little extra kick to anal play. Of course, if you’re looking for a fist to shove up there, this isn’t your toy. Sorry. Perhaps you could try this monstrosity. That I will never review. Ever. Nope. Hard pass.

You’ll be happy to know that lube was used generously with this toy and everyone walked away happy. Hooray! More smiles, more orgasms, MORE LUBE!

Once we turned on the vibrations my world became just a little more perfect. I don’t know if I ever want to have sex without it again. Am I for real? Definitely REAL. There are 10 vibration settings and they’re all a little different. You have the full on single constant pulse, and then a lot of other options. I didn’t even know there were that many different possible vibrating options but I was incredibly willing to try them out. There was a lot of ‘ooohing’ and ‘ahhhing’ and ‘ohmygodstoprightthereing’ as my husband rolled through the vibration levels.

If you’re looking for an orgasm helper, I have found your newest friend. There’s something about the vibrations and plug combo that took me from zero to ‘OH’ in less than half my usual lap time. It was awesome. You need this toy.

I was a little concerned that the cord was going to get in the way during sex while I still had the plug in, but I was informed that it wasn’t an issue. Even doggy-style, the plug/cord combo didn’t nick, scratch, or otherwise distract my husband from his mission. He has his own favorite vibration setting, so now really I think the only problem moving forward is who wins as to what setting the plug lands on. Sigh. I think somehow I’ll manage.

Overall, this plug had me buzzing. [I had to. It was there. You should be surprised I waited this long]. It gets both 5 stars and frequent use. LOVED IT!

WIN a paperback signed copy of Nikki Sloane’s Three Hard Lessons AND the Doc Johnson “The Touch” Vibrating Plug over on my Facebook page!

Review: He Wants Me – Part 8 by Julia Swift