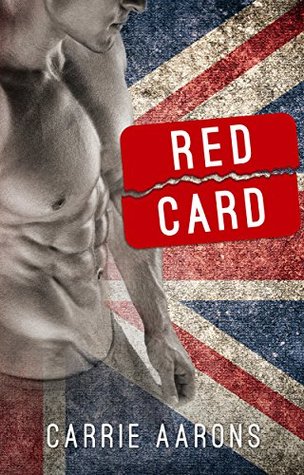 London is Leah Watson’s fresh start. When she secures the perfect internship during her study abroad semester, with an infamous celebrity public relations firm, she is determined to forge her own path – one that is nothing like her life back in Oklahoma. That plan is tested when British football’s bad boy, Killian Ramsey, decides that she’s the one he wants and he’s playing for keeps.

Will she put her future on hold – again – for the type of man she swore she’d stay away from?

Killian is one bloody good football player. After a tragedy shattered his entire world, the cocky and arrogant face he puts on for the media is a complete lie. When he meets Leah, his heart starts to beat for the first time in years. But when the feelings get too real, his perfectly constructed facade starts to slip.

Will he risk it all to be with her – taking whatever penalties are thrown his way – or will he play it safe?

Aarons scores with RED CARD. I loved the feel of this book. It screamed sex and yet dealt with some serious topics that I wasn’t quite expecting. Killian may be a british football star (read: soccer player) but he’s also been through the shittiest of shitty experiences that has molded him into an awful asshole.

Kate’s not exactly had a world of puppies and sunshine either and she’s desperately trying to come into her own. I wanted her to get her backbone just a littttttle bit sooner, but otherwise she was smartly written and easily likeable.

There was a bit more drama than I expected, but in a good way. Aarons kept the plotline moving and increased your desire to know the characters in a deeper way with each bit of information she doled out. There’s some seriously steamy scenes that had me a little flushed. There was one scene in particular that made me want to throw my kindle across the room and watch it combust into little pieces – but that’s what makes me know that I really love the book. When the characters actions get me SO ANGRY that I need to expel that anger in real life.

Aarons brought it out in me. She brought out my anger and my frustration and then tamped it down with an explanation and forgiveness. This sports romance is going to make you cheer, notwithstanding that incredible fucking cover that makes me quiver. Killian will do you in with his cheeky quips and cocky…demeanor. Get ready to ignore your family and find a new book boyfriend!