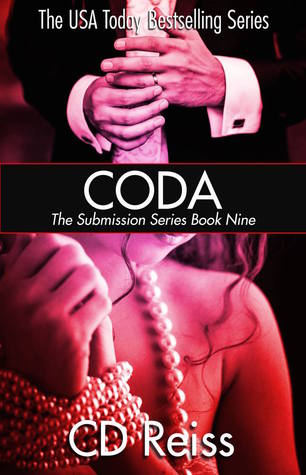 Did you want a pat little ending about Jonathan and I riding off into the sunset? Did you want flowers and stars? Man, I wish it was all soft filters and violins. I wish we could fight about who cleaned the bathroom or who was cooking dinner. But I knew I was never destined for simple contentment.

I almost committed murder for him. I almost tore us apart to save him. How do you get back on the horse after that? Because, I promise you, nothing is the same. Nothing.

I’ve earned our happily ever after. Now I have to survive it.

First of all – you have to read the books in order before you even get to Coda. It’s a marathon that will leave you exhausted and panting and wondering when you can do it all over again. But you have to do it. GO NOW.

I gave Coda five stars not just because I love this series, but because CD Reiss writes like Jonathan fucks: strong, steadfast and with purpose. This book bruised and battered me worse than Jonathan with a cane – And I loved it just as much as Monica. I felt that rush of pleasure while reading that only happens when I’m so fully invested in the story that it seeps into my bones….let it be known that The King has returned.

Jonathan has a new heart. A heart that tells him that he loves to run and that he hates spicy food. What else has this new piece of flesh done to the strong man that he once was? Thankfully it hasn’t changed his love for Monica. However, while he may love her, he hasn’t been giving her what she needs. He’s allowed to her to stray off their path where, no matter what, she obeys. And it’s destroying them both.

Even though they may have reclaimed the bedroom, Monica and Jonathan both struggle with how to move forward in their new lives. Monica worries that they got married too quickly – does he now regret it? Jonathan worries that his heart will leap out of his chest and flop around while Monica’s tied to the bed. No matter the idiocy of the worry they both try to regain their footing in this new relationship that has been stretched and pulled and snapped.

My joy mixed with sorrow while reading this conclusion to the series. MY HEART SHATTERED after it was filled to the brim. CD knows how to destroy you with words and she does it repeatedly. Five stars? More like Five Million. So much love for Songs of Submission. #MUSTREAD.

Review: Waiting for the One by L.A. Fiore