There are seven parts to this series (technically 8 w/ the extras in Dominance) I’m reviewing it as a whole because I cannot separate the gloriousness of the entire story.

Beg, Tease & Submit come in a bundle. I recommend buying the bundles because not only will you save money, but you will want/need immediate access to the next part of the story.

Control. Burn & Resist shall be your next necessary purchase.

Have I read it before?:  Nope. but I will again.

What did I drink?:  Chardonnay. I have a love affair with dry white wine. I drank it out of my new mug that says ‘I like my drinks strong & my books smutty’ 😉

How do I feel:  Good! happy I didn’t drink more since I was ready to pass out at 10pm anyway.

This is one series where the covers of the books actually drew me in. They’re beautiful and sexy and simple. They actually made me want to buy the books. If the covers of these books don’t do it for you, I’m not sure any covers will. Besides the perfect artwork (which is totally frameworthy), this story is amazing. I have no idea how many pages the entire series equals but at the end of last night I felt like I had just finished a marathon. I was exhausted but totally satisfied. 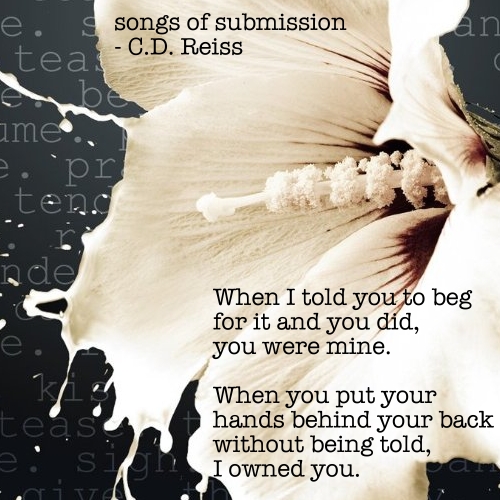 Monica is a struggling waitress/singer in LA. She lives with her best friend and roommate Gabby in a run down house in Echo Park and pays minimal rent to her mother. She dated Darren, Gabby’s brother, for like twelve thousand years, but they’re just friends now. After Darren, Monica dated Kevin Wainwright – a very good looking artist who is now up and coming himself; however, Monica walked out on him a year and a half ago and since then she’s suffering from self-imposed celibacy, focusing instead on her music.

And then we meet Jonathan Drazen. Sweet mother of Christ he is fucking delicious. From the very beginning he kept me on my toes. He was mostly honest but still hid behind a mask. He would do or say exactly what I thought he would, but then in the next second, I’d be thrown for a loop. It was refreshing to read and scorchingly hot to imagine.

Full disclosure, I started this series on Friday while I was at work. I was super busy, but I kept taking five minute breaks here and there to read a chapter. It was my motivation.

Have you read @CDReisswriter 's Songs of Submission series yet?? Looking forward to sneaking my fix throughout the day. It's so good!!

By Friday night I had finished Tease. and the way it ends will throw you into a little rage.

Holy mother of fuck. Just finished #Tease in the songs of submission series. Thx CD…that should be sufficient to fuel my workout.

I really did workout on Friday night (I’m basically the coolest person on earth) and it really did help fuel my workout. I WAS SO ANGSTY.

Saturday I was sneak-reading all day in between doing other things until finally I decided: DRUNK READING TIME:

It's a little early, but fuck it. Starting #drunkreading of #songsofsubmission – I'm on #Burn in case you were wondering.

I started drinking at the same time that I started the scene after the art show in the bathroom. For those that haven’t read it yet, holy shit. I needed a drink after that, so it was a good thing I had one. The memory of that scene is making me a little hot….[FANS SELF]. The sex scenes in these books are assuredly NOT VANILLA. and i loved every second of it. They are off the charts hot. You want kinky fuckery? C.D. Reiss shows you some kinky fuckery.

I love that she doesn't let him manipulate her with sex even when he thinks he is. #songsofsubmission #drunkreading

A good portion of the storyline is about Jonathan hiding issues from his past and him keeping Monica from meeting with Jessica (his ex wife) to find out what exactly he’s hiding. Monica thinks she’s protecting Jonathan – Jonathan has his own plan. Too bad Monica is only submissive in the bedroom. This causes a little….shall we say, friction?

This series is an emotional rollercoaster. The anticipation of what is going to happen and then what actually happens causes you to gasp and scream but ultimately throw up your hands and go along for the ride.

I shall never think of tea the same way again. #drunkreading #songsofsubmission

Being as how I started #drunkreading at 5:30, I started to fade around 9pm…

I'm tired but I CANNOT STOP READING. this series is like crack. It's a Metaphor. Promise. #songsofsubmission #drunkreading

BUT I MANAGED TO FINISH.

This series has everything you could ever want in a good erotica novel: depth of characters, really really hot tie-me-up/spank me/bruise me sex, a bit of mystery, a strong independent woman and a complicated, conflicted yet undeniably loving man. AND it’s a mixed POV book. I really enjoyed reading from both Monica and Jonathan’s perspective. My only critique is that by the end of Sing, I really wanted a bit more right before the two year gap. I understand that there was a cliffhanger for a reason, but I felt that the ending was a little bit rushed. Which is probably hilarious to say since the series is lengthy. Maybe I wasn’t ready for it to end? That’s a possibility too, but I don’t know, I just wanted a little something more there. The 8th companion read – Dominance – gives you a bit more, so for that I’m thankful.

If you’re not into a Dom/Sub theme with spanking or a little pain in your sex scenes, you’re not going to like these books. But if you’ve been craving it and haven’t found THAT combined with a good storyline then look no further. THIS SERIES HAS EVERYTHING. ALL THE STUFF. My heart dropped out of my chest, exploded with excitement, and filled with love.This series is one you’ll want to keep for yourself but you know it needs to be shared So, Get it. Read it. Tell your friends. Jump on that emotional rollercoaster.