“The story line pulled me in from the get-go and was unlike anything else that I have read in the past, which was a really refreshing discovery. Highly recommend this one, it is sure to tug on your heartstrings and leave you with a smile!” – Reds Romance Reviews 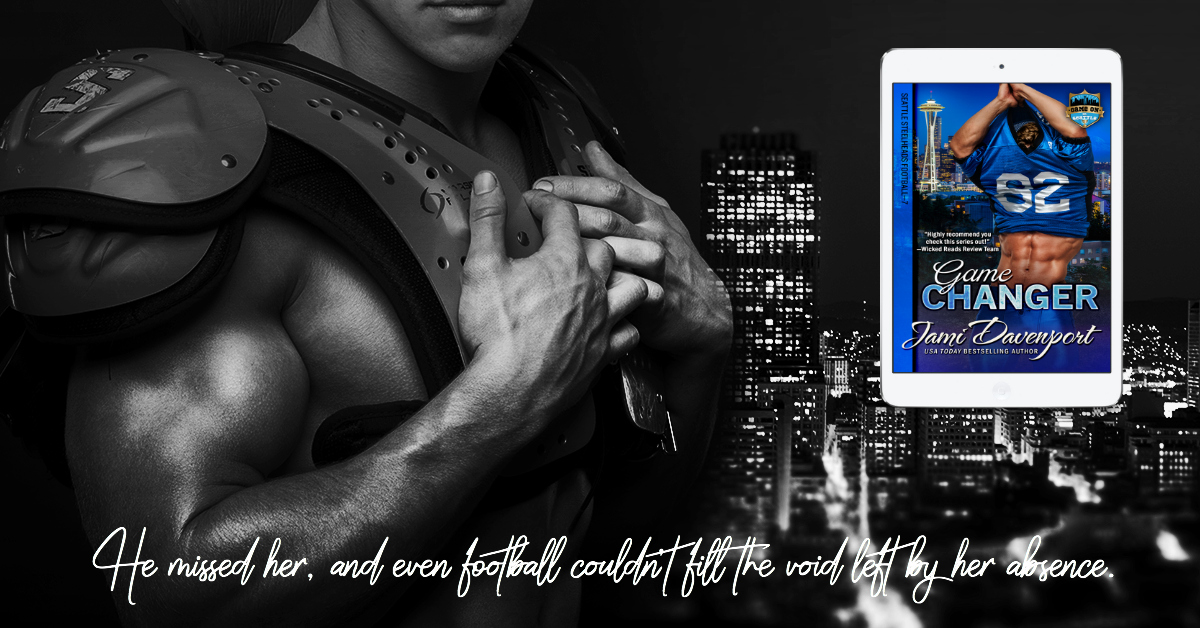 When horse racing and football collide, Hunter McCoy, star tight end of the Seattle Steelheads and neophyte horse owner, finds himself in a battle of wills with a sexy horsewoman and a stubborn, champion Thoroughbred.
In order to save the farm and fulfill her dying mother’s wish, Kate Vanderhof-Carrigan’s Thoroughbred has to beat Hunter’s horse in the Derby, an easy enough feat until her heart entered the race.
Lilli McCoy, Hunter’s sister, has been burned by men before, but she’d believed her last boyfriend was The One. He wasn’t. He couldn’t deal with Lilli’s disability and used her blindness as tool to cheat on her. Reeling from the betrayal, Lilli returns home to lick her wounds. She hadn’t factored in the instant attraction she’d feel for her brother’s playboy teammate, Cameron Swift. One playboy in her life should’ve been enough. 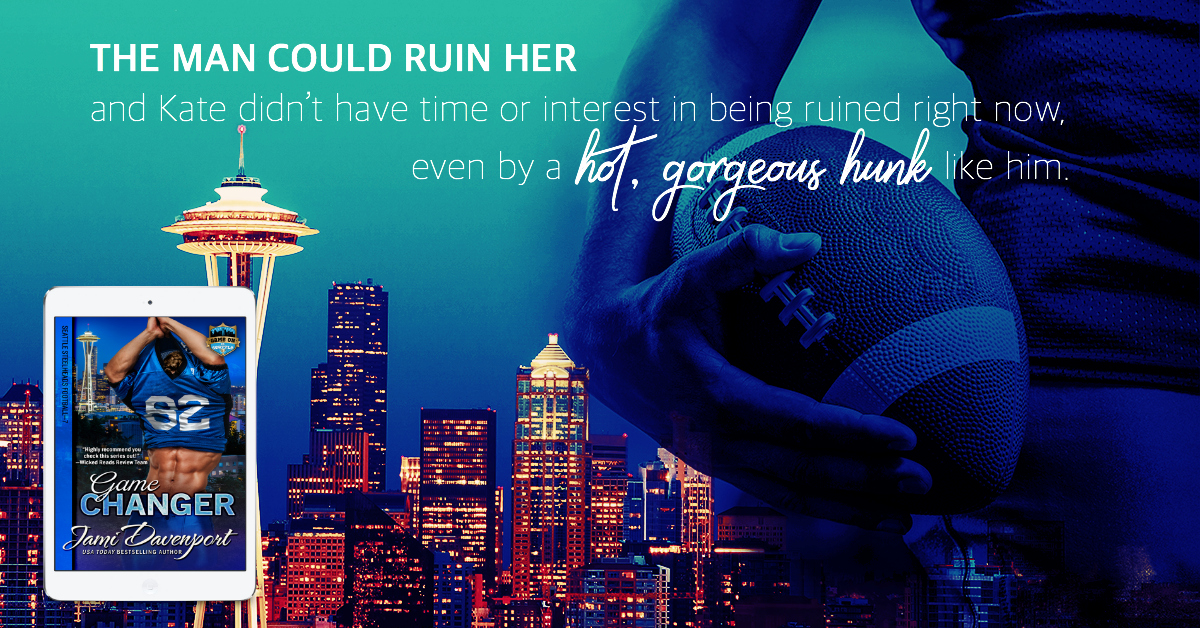 Hunter turned to regard the woman staring at him as if she’d never seen a man before. Per usual, he waited for a sign, but nothing happened. No thrill of recognition of his soul mate. No quickening of his heart. No sense that he’d finally come home.
Nothing.
This woman was not The One. Not that he expected her to be, but he prided himself on being open-minded.
She approached him, and her blue eyes glinted with the single-minded purpose of a linebacker pursuing a quarterback. Hunter braced himself, ready to politely dismiss her, though he doubted she was the kind of woman easily dismissed.
Perhaps she was a football fan. Hunter always had time for fans. As one of the few Native American football players in the league and a member of a Coastal Salish tribe, he was sought after for interviews, photo sessions, and as a role model for tribal youth. He did his best to meet every request as part of his campaign to further the average person’s understanding of Native American culture.
He smiled and held out his hand. “Hello, I’m Hunter McCoy.”
She didn’t exactly smile back. Instead, she looked him up and down as if she were assessing him for strengths and weaknesses.
“Kate Vanderhof-Carrigan.” She shook his hand, her grip surprisingly firm for such a slight woman. He sized her up. His well-honed instincts warned him she’d be a formidable opponent. She was attractive but not classically beautiful by society’s standards, though Hunter had little use for such crap. She wasn’t tall, but she took advantage or her every asset from perfect yet subtle makeup to burnished reddish brown hair that curled around her shoulders.
Hunter stifled a surprising urge to bury his fingers in her hair. She didn’t look like a woman who’d be interested in a one-night stand, nor was she his destined mate. She actually looked like the uptight, get-ahead-at-all-costs type. Everything about her reeked of money. Hunter didn’t care much for her type, even if his libido seemed slightly interested, but then right now it was interested in any woman.
“That’s your horse?” She pointed at Seastrong, known as Sid around the barn.
Hunter puffed up a little with pride. “Yes, he is.”
“I’m interested,” she said, getting right to the point.
Hunter frowned. “Interested?”
“In your horse.” Her impatient tone indicated she considered him some sort of moron.
“In what way?” Hunter wasn’t sure he understood what she was getting at. He had a trainer, and she didn’t look like a groom, not with the quality clothes she wore.
“I’d like to buy him?”
Hunter threw back his head and laughed. “He’s my Derby horse.”
Her jaw tightened. “Name your price.”
“I have fifteen investors. Even if I wanted to sell, they don’t.” That wasn’t entirely true. Every one of his investors would sell if he wanted to sell. They were comprised of teammates, athletes on other Seattle teams, and a few team management types. None of them had much interest in horse racing, short of showing up at the Kentucky Derby and standing in the winner’s circle. Accomplishing that feat was a long shot in itself, but Hunter had a good feeling about this horse, and so did Lilli.
“Everyone has a price.”
He thought about that for a second. “I don’t. He’s more than a horse to me. He’s a member of the family. My sister would be heartbroken if I sold him. They have a connection.”
Skepticism crossed the woman’s beautiful face. “Maybe I should be talking to your sister instead.”
“It won’t do you any good. She gets very attached to her animals.”
“I want that horse.” Kate appeared to be one of those women who wasn’t used to hearing the word “no.” She narrowed her eyes and studied him intently. He studied her right back.
“That horse is not available. One doesn’t sell a member of their family.”
She snorted, as if she considered his statement ludicrous. One more reason he’d never sell to her.
Hunter shot her one of his best panty-melting smiles, just for the hell of it, to see if he could melt her icy demeanor. He wasn’t conceited, just confident and self-assured. He was a professional athlete in his prime. Women flocked to him. Some of them got closer than an autograph, but never for long.
Hunter didn’t waste much time dating the wrong women. Kate was the wrong woman.
And Sid was not for sale. 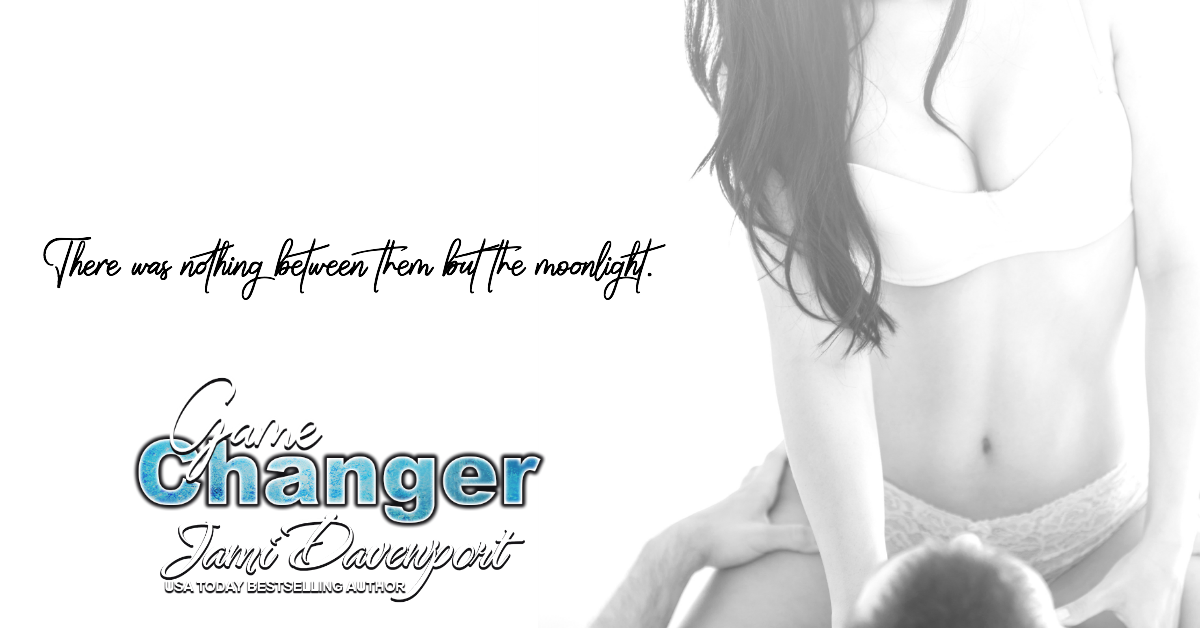 Blog Tour: From a Distance by LM Carr