Keep reading for an excerpt!! 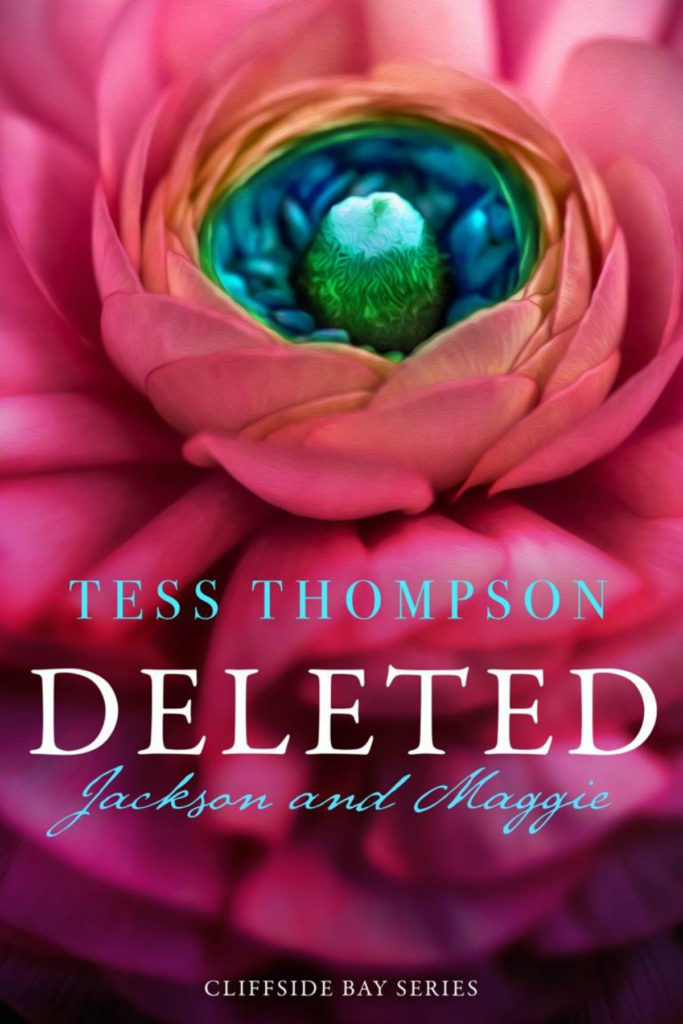 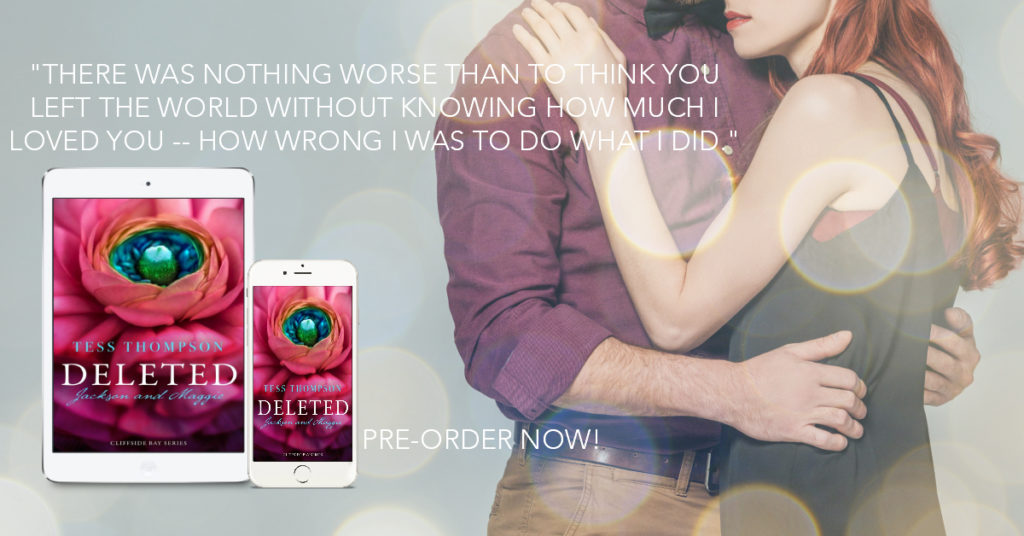 Maggie paced in front of the window of Zane’s apartment, alternating her gaze between the street below and the gentle slope above town where the Waller’s house seemed to cling to the hillside. From here, she could see a patch of gray-shingled roof. Zane had been gone too long. Why was it taking this much time? He’d left minutes after they shared coffee and toast, both bleary-eyed from talking half the night.

The sound of heavy footsteps coming up the stairs snatched her from the window. She stumbled into the side table and smacked her shin. Breakfast churned in her stomach. When the front door creaked and opened, she froze, almost blinded with fear and nerves.

Jackson filled the doorway. They stared at each other from across the room. This was Jackson. The adult Jackson. His facial features, delicate when they were young, had hardened into sexy contours. His body was more substantial, thick and muscular.

An invisible hand wrapped around her heart and squeezed until the pain was nearly unbearable.

His face contorted into a dozen spasms. “Is it really you?”

He crossed the room with his arms outstretched. She moved toward him through the blurry fog of her tears.

When they reached each other, he grabbed her and pulled her against his firm chest. They trembled as they clung to each other. “I’m so sorry. I’m so, so sorry.” He dropped his face into her hair. “I’ve wanted to tell you for twelve years how sorry I was. I never thought I’d have the chance. There was nothing worse than to think you left the world without knowing how much I loved you—how wrong I was to do what I did.”

“We were young and silly,” she said.

“I was young and horribly stupid. So careless and selfish. I’m sorry.”

“It was so long ago.” She brushed the side of his face with her fingertips.

He held her away from him for a moment, searching her face. “It was both a second ago and a lifetime ago.”

She lost all sense of time as she stared into his blue eyes and breathed in the scent of his skin. Had his lashes always been so thick and black?

“I’m not feeling too hot myself.” When they were seated, he held her hands. “Your eyes are the same.” He grazed her cheekbones with the tips of his fingers.

Her stomach dipped like it used to when she rode the surf. “Yours too.”

He caressed her cheeks with his thumbs. “Freckles like a starry night.”

She resisted the urge to rest her cheek in the palm of his hand. “That metaphor was always all wrong. Stars aren’t the color of nutmeg.”

Maggie flushed. Could he see how her heart pounded inside her chest? She traced the tiny lines at the edges of his eyes that made a roadmap to his hairline. “You have crow’s feet.”

“I’ve wondered…how you were…if you’d gone to medical school. If you were married and had children.” She looked away, willing herself not to blabber and sob. Strong. Remain strong. Set him free.

“There was never a day I didn’t think of you,” he said.

“There wasn’t one day that I didn’t miss you like hell. Not one single day.”

“For years my prayer was to wake without any memory of you. What a relief it would’ve been. Like a strong painkiller.” She smiled to take the edge off her words, but it didn’t matter. From the mournful look in his eyes, she knew he understood it to be an absolute truth.

“I couldn’t even look at photographs of us,” he said.

“I burned all mine.” She swallowed as a dull knife twisted in her stomach.

They both looked away. Suffering between two people was palpable. Pain molecules hovered in a charged mass between them. At any moment, the mass could unleash and spill agony all over Zane’s clean floor.

“There were a lot of good times,” he said. “They were almost all good when we were together.” 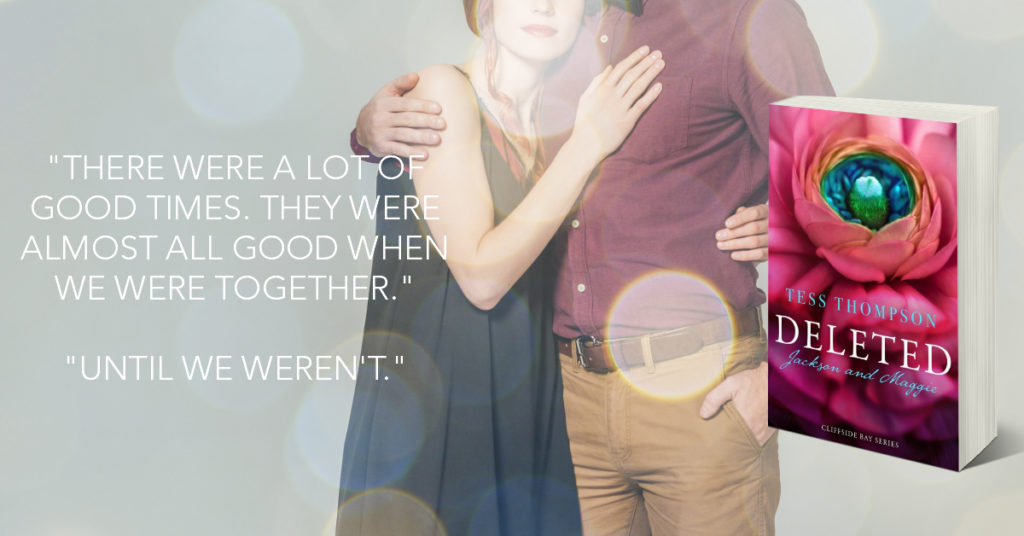 Jackson Waller has loved Maggie Keene since they were six years old, but their dueling dreams ultimately tore them apart. First love—true love—wasn’t enough to overcome their individual desires to pursue dreams on opposite coasts. When Jackson learns of Maggie’s tragic death on her way to college on the east coast, his heartbreak, compounded by grief, renews his focus on his own future. He vows to do nothing but work toward his goal of becoming a doctor, and maybe enjoy the companionship of his new college buddies, The Dogs.

Maggie Keene left Cliffside Bay with two things: a broken heart and her ambition. For twelve years she relentlessly pursues her dream of a musical theater career in New York City, but when she learns her father is dying, she returns home to find the truth about her family’s ugly past. There, she discovers two things that will change everything: one, the bitter old man has spread a wild rumor that she has been dead for over a decade; and two, Doctor Jackson Waller is also back in Cliffside Bay—with his brand-new fiancée.

The second installment of The Cliffside Bay Series by bestselling author Tess Thompson follows the interwoven stories of five best friends, the beach community they love, and the women who captivate them. Prepare to get lost in a wave of small town charm, men you would love to take home to your mother, and smart, resilient heroines you wished lived next door. 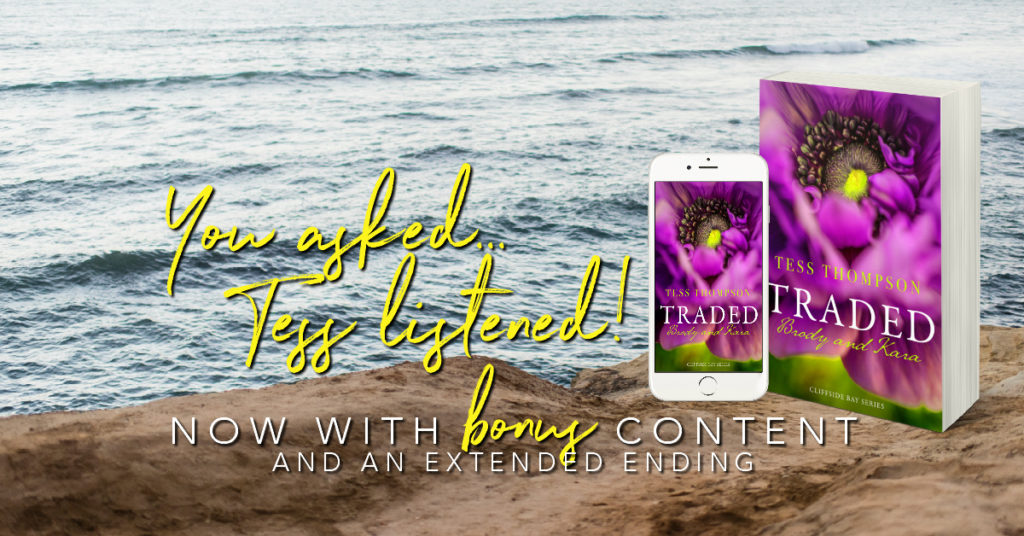 He’s the best quarterback in the AFL. She’s a young woman desperately in need of a fresh start. Neither expects to fall for the other. Will he finally put love ahead of his career? More importantly, can she trust him with secrets so deep her very life depends on them?

Like most of her characters, Tess Thompson hails from a small town and will always feel like a small town girl, despite the fact she’s lived in Seattle for over twenty-five years. She loves music and dancing, books and bubble baths, cooking and wine, movies and snuggling. She cries at sappy commercials and thinks kissing in the rain should be done whenever possible. Although she tries to act like a lady, there may or may not have been a few times in the last several years when she’s gotten slightly carried away watching the Seattle Seahawks play, but that could also just be a nasty rumor.

She currently lives in a suburb of Seattle, Washington with her brand new husband, the hero of her own love story, and their Brady Bunch clan of two sons, two daughters and five cats, all of whom keep her too busy, often confused, but always amazed. Yes, that’s four kids and five cats. Pray for her.