Last night was the first installment of #DrunkReading – where I read or re-read a book while drinking and live tweet my thoughts/reactions. Therefore, that makes this morning my first drunk reading hangover. Don’t worry, I’m already drinking coffee.

Have I read it before?:  Yes. This is the fourth read through I believe.

What did I drink?:  2.75 large glasses of pinot grigio. LIGHTWEIGHT. my college self is laughingherfuckingassoff.

How do I feel:     As Ana would say: better than I deserve. I woke up with some minor dry mouth and my head is just now starting to pound. I did not have OJ & advil sitting next to my bed when I woke up. Apparently my husband is not Christian Grey. Figures.

Well, forgetting the no OJ and advil fact, I’m quite thankful that my husband is so supportive of my ridiculous ideas. He even replaced the small bottle of wine I had originally picked up at the store with a much larger bottle. and then when the drunk reading began, he just sort of left me to it. Also, THANKS VERONICA for drunk reading with me. and thanks for the permission to use our texts on here. I haven’t mentioned that to you? SORRY. you’re hilarious. I’m using them.

I had started to re-read fifty on Friday night. It’s part of something else I will be doing for this blog and I thought it’d be interesting to read it now that I have some perspective. AKA now that I’ve fictionally fallen in love with Gideon Cross over Christian Grey.

So, last night I began when Christian’s mother arrives.

and then things began to get interesting. I began noticing things I never noticed before and talking about things that bug the fuck out of me. I mean, this book is set in 2011 – I graduated from college in 2006…I had a computer, a crappy one, but a computer for the entire four years of college – WHY DOES ANA NOT OWN HER OWN COMPUTER?! or smartphone? I mean, I get she’s inexperienced in sex but no one said she’s inexperienced in LIFE. COME ON.

and then, when everyone else probably glanced over the contract. I, like a lawyer freak, grabbed onto it with joy. THIS IS WHAT I DO! and frankly, as I read it again last night, I had to let EL James know I was impressed. It’s pretty legalesey. It reminds me of a similar contract I made with my husband while I was in law school….ohhhh the memories.

and then something happened. It was like the world shifted. It could have been the couch and the fact that I was super drunk. but I prefer to think that it was the world.

Glass three. I swear to god it feels like I'm reading this for the first time. #fiftyshadesofgrey #drunkreading

and the Christian hold began to once again take over.

and apparently I wasn’t the only one. 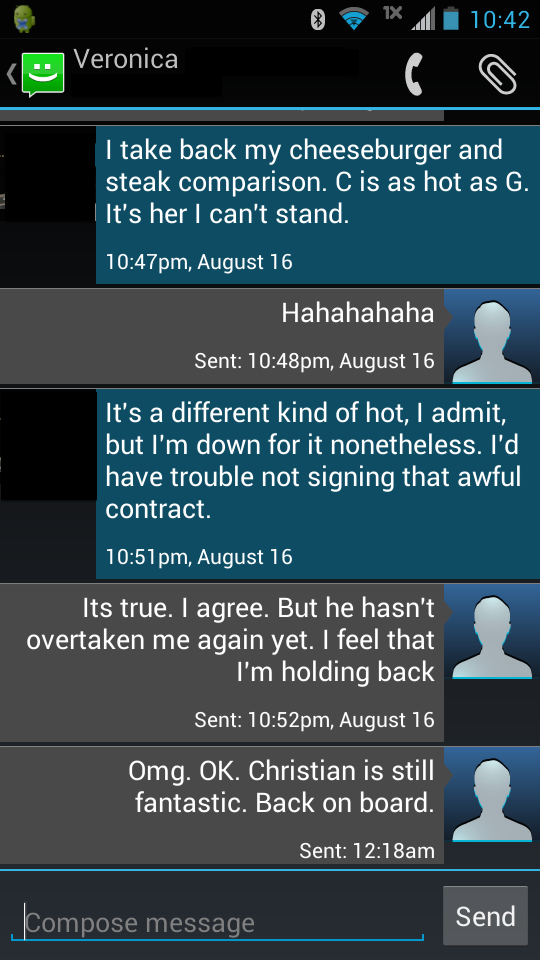 what cheeseburger and steak comment, you may ask? THIS ONE: 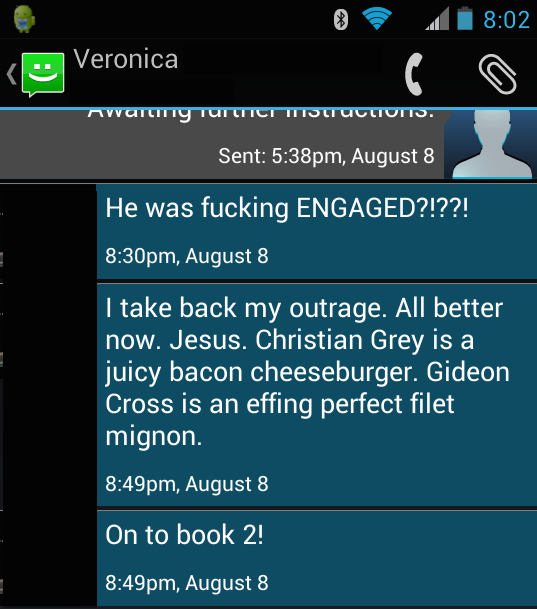 And yes, to touch on one of Veronica’s points. Ana is annoying. She really is. She’s right up there with Bella. oh wait, THAT’S BECAUSE SHE IS BELLA. Think that one got over on me? No. I’m an internet stalker. I am very aware of MOTU and its outtakes as well as Midnight Sun and its gloriousness. But really, Ana’s internal monologue can get pretty obnoxious, which is why it’s a good thing that Christian is so delicious.

So fucking drunk. Too much wine. Christian is still amazing. First love and all of that. #drunkreading #FiftyShadesOfGrey

So, frankly. this was a very educational experience. Apparently alcohol allowed Christian Grey to again reach his long, skilled fingers into my heart. however i’d prefer those fingers elsewhere….JUST SAYIN’.

Confession: How I came to read Harry Potter at age 30