Review: Under My Skin by J. Kenner 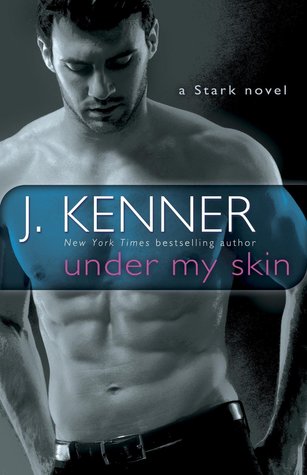 He’s the only man I’ve ever loved, and the one man I can’t bear to lose.

Jackson Steele is my light in this world. Charismatic, bold, and always in control, he knows what he wants and how to get it—and absolutely nothing stands in his way. His hold on me is magnetic, his claim on me complete, his kiss my ultimate escape.

We both harbor dark secrets that could tear our lives apart. Though we’ve tried to bury our pasts, there are certain people who won’t let us forget. But the closer danger comes, the brighter the fire between us burns—our ecstasy consuming and soothing us both.

There’s no telling what lies ahead, but I know that Jackson never gives in without a fight. I’d do anything he wants to keep him safe, give him anything he needs. And now that we’re in deep, nothing can make me run.

Under My Skin is intended for mature audiences.

J. Kenner mixes a hot alpha man with a murder accusation, sabotage and sex so hot you’ll fall to your knees. The relationship angst is light (thank fuck) but there’s plenty of other drama to pull your interest. And throughout it all a thread of heat sizzles just underneath every.single.scene.

Jackson Steele is back and hotter than ever. We catch back up with Sylvia and Jackson after learning that the Hollywood producer we all really really hate is dead and Jackson is the main suspect. Suddenly Jackson and Sylvia are barraged with lawyers and PR people and the media circus commences.  Their private lives are no longer their own and every move is splashed across the front page of every gossip mag. Sylvia tries to deal with it, but struggles. Jackson tries to ignore it, but fails. Yet, when the two of them work together as a team – they realize that they just might be able to conquer anything.

Sylvia is awesome (for the most part) in this book. She hasn’t forgotten her promise to Jackson – the promise where he can use her as he needs to – and use her he does. PHEW! Sylvia grows so much in this series, and this book solidified my love for her. She uses what she previously believed to be weakness as a catalyst to propel her forward and stand on her own two feet. GO SYLVIA.

The Stark series is one of my all time favorites and I am so loving the continuation of this series. The brotherly bromance between Jackson and Damien was icing on the goddamn cake. They. Were. Adorable. In Under My Skin, Kenner leaves you feeling sated and completely satisfied – giving you the steamy scenes she’s known for with a slight undertone of submission. oh yes please, SIR.

ICYMI, I fucking love this series. This is a #MustRead.