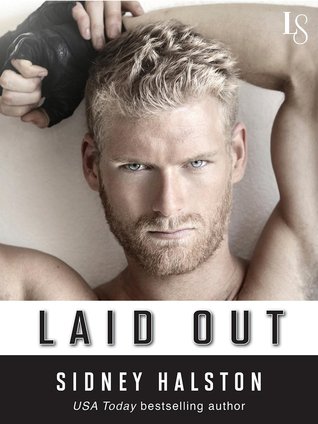 Growing up an Army brat, Violet Channing could never meet her dad’s high expectations. But in the eyes of her best friend, she could do no wrong. He even insisted that he should be her first kiss. Now Cain Sorensen is all grown up, hardened by years in special ops and always looking for a good fight. Tall, with striking blue eyes and impossibly blond hair, he’s a modern-day Viking warrior. Of course, Violet’s all grown up, too, and she’s ready to surrender to his every command.

Cain knows he’s bad for Violet. His work is dangerous, and his hobbies are downright deadly. As a private mercenary and a mixed martial arts fighter, he could never let such an innocent soul into his world. And yet his most grueling combat training is no match for Violet’s killer curves, hot touch, and suggestive glances. Now all of Cain’s most explosive fantasies are coming true—but once they cross the line between friends and lovers, there’s no turning back.

Cain is a hot, sexy, and mentally fucked up former military man who is fighting for all the wrong things. He fights to numb his pain. He fights for a private military contractor to make money. But he won’t fight for Violet because he doesn’t think she could ever be his. Because she was his best friend’s fiance. OH, THE ANGST!

[Note: not sure if his name was intentionally referring back to the Cain & Able from the Bible, but I sort of loved the symbolism if it was].

Violet & Cain been best friends for years – until Violet’s fiance (and Cain’s best friend) is killed in action. Suddenly, Cain pulls away, buries himself in work and keeps himself far away from Violet – because he’s terrified he’ll throw himself at her if he sees her again. His love for Violet runs deeper and longer than anyone knows – but his guilt holds him back from letting himself explore his feelings.

Violet finds out that falling in love with your dead fiance’s best friend can cause serious problems. Especially because she isn’t even aware of the fact that she’s in love with Cain. Violet oscillates between being super insecure and overly confident, which was sort of annoying. But on the whole, she’s a nice girl who is overly forgiving and who can’t seem to move on with her life.

This one is angsty but pretty damn hot. Sidney works you up and then lets you stew. Quite a few times. I actually screamed out “BUT WHEN ARE THEY GOING TO BANG?!” at one point. Thankfully, my husband is used to such outbursts. They most definitely eventually bang. DON’T WORRY.

There are plenty of sweet moments to enjoy here, and most all of them occur when Cain let’s himself enjoy life, not focusing on the past and what can’t be changed. His inner struggle is evident and painful at times to read – and the miscommunication between them is just enough to make you whimper, but it doesn’t turn into a full out scream.

Laid Out has twists and turns that kept me guessing. It doesn’t hurt that I’m also a sucker for a man in uniform. This is a fantastic read for those who long for the angsty relationship with an undercurrent of sexual tension that’s poised to pop. ENJOY!

She was kicking a rock out of the way when Cain grabbed her hand and pulled her to a nearby tree, causing her to yelp as she struggled to keep her balance. At nineteen, Cain was thin and lanky—all limbs. She was still short and stumpy. He turned her around brusquely and pressed her back against a tree, the bark digging into her. She looked up at him and saw an intensity in his eyes she’d never seen before. His cheeks were flushed and the vein by his neck pulsed. Suddenly she became nervous. He’d never looked at her this way—the way the cute guys looked at the pretty girls.

Lately she’d felt flustered when Jeremy was nearby, with his mess of curly dark brown hair and dimpled smile. Feelings that hadn’t been there before were now creeping in. In fact, she could’ve sworn Jeremy had been flirting with her lately—complimenting her clothes and hair, brushing against her “accidentally,” inviting her to the movies without Cain around. But these brief flirtatious moments were with Jeremy. Not with Cain. Never with Cain. Cain was just her friend. A little gangly, a little quiet, a lot overprotective.

That was until now.

Suddenly there was an awareness that had never been there before.

When he licked his lips, her pulse sped up. A foreign feeling—desire—began to take root. He reached toward her hair, and she flinched a little before he tucked a stray strand behind her ear. The tender action surprised her. For the first time, she noticed how clear his blue eyes were, how his hair was so blond it almost looked white. All of a sudden, he didn’t seem like just this boy who was always around. Unfamiliar feelings began to erupt throughout her body. She felt her cheeks flame and her heart race.

When he finally spoke, his voice shook a little. “I’m your friend because I want to be your friend. Not because of your parents or your dumb threats. I don’t like it when you call yourself fat. You’re not fat.”

She nodded and murmured, “Okay.” She drew her lower lip into her mouth and nibbled as her wide eyes gazed at his. Cain reached over and pulled her lip out of her mouth. “You’re nervous.” It wasn’t a question. He knew her well enough to be aware of her tells.

“I don’t want you to kiss just anyone to get it outta the way.”

Words failed her, so she just nodded again. There was a moment where neither spoke. He just looked at her as if trying to decide on his next move.

“I should be the first person you kiss,” he finally said as his tongue flicked out a little and wet his lips.

She gasped and looked up into his eyes nervously. His eyes never left hers, but his reddened ears and neck showed that he was also nervous. She too knew him well.

Like a fool, she bobbed her head up and down mostly because the words were stuck in her throat. It felt like he stared at her lips for an eternity until he finally leaned forward, causing her to press herself further back against the tree, her hands gripping the bark. He tilted his head to the side and she imitated the action.

Should I open my mouth? Leave it closed? What about my tongue? What should it be doing?

Softly, almost feather light, his lips brushed against hers. Her eyes instinctively closed tight, and she stopped breathing. It was less than ten seconds but it was forever. In that moment she fell into the category of girls who’d had their first kiss. She kept her eyes closed for far too long, and when she opened them he was standing upright, his face even more flushed. Her own tongue snuck out of her mouth to taste her lips. She swallowed and looked at him, her eyes as wide as saucers. What just happened?

Then, with the same intensity in his expression, he leaned back down, but this time he pressed harder against her lips causing her lips to part slightly. His body moved closer to hers, and then she felt his hands grip her waist and his tongue touch her lips before it moved into her mouth and brushed hers for a brief second, his fingers digging into her skin at her waist. She instinctively melded into him, her body seeking him out.

Again he moved away and looked at her. His expression never changed, and neither did hers. Her eyes were wide; she touched her lips, as if to determine whether the kiss had really happened. They just looked at each other, neither saying anything, her heart beating so loudly she was sure he could hear it. Finally she spoke and said the only thing that came to mind. “Wow, my cup runneth over,” she whispered. It was a phrase he teased her about constantly, but it was exactly how she felt: she could barely contain her happiness.

He chuckled, and the smile did her in: she threw her arms around his neck and kissed him. Hard. He wrapped his arms around her waist and walked them the half step back against the tree again. Their noses bumped. It was awkward, but as first kisses went . . . it was perfect.

“Happy Valentine’s Day, Vi.” It was the last thing he said to her before leaving for war.

USA Today bestselling author, Sidney Halston lives her life by one simple rule: “The secret of getting ahead is getting started” (Mark Twain). Or even simpler: “Just do it” (Nike). And that’s exactly what she did. At the age of thirty, having never written anything other than a legal brief, she picked up a pen for the first time to pursue her dream of becoming an author. That first stroke sealed the deal, and she fell in love with writing. Halston lives in South Florida with her husband and children.