Review: The Billionaire’s Deal: The Complete Story by Crystal Kaswell 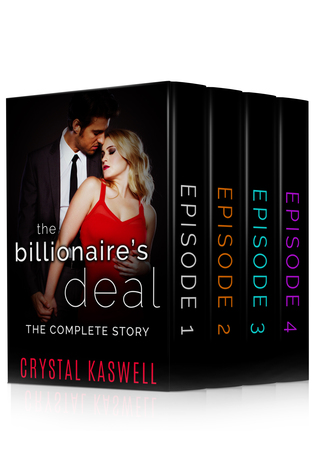 tl;dr recommendation: Sexy and fun, on the whole this baby gets three stars!

Kat Wilder is utterly screwed. Her parents are gone. Her meager inheritance is dwindling. Her attempts to get a better job are going nowhere. If she doesn’t do something fast, she’s going to lose the house she shares with her sister.

Billionaire tech C.E.O. Blake Sterling is a lifeline. An arrogant, controlling, impossible to read lifeline. He wants something from Kat and he’ll do whatever it takes to get it.

He offers her a deal– she plays his girlfriend and he digs her out of debt. It has to be so convincing that everyone believes they’re madly, crazy in love.

It’s Blake’s way, Blake’s terms, Blake utterly in control inside and outside the bedroom.

This is their complete story.

This story is an enjoyable slide into a paradise where the billionaire’s feeling are locked down tight and the heroine slips into a situation that she can’t turn down.

Kat is in a tough position – her parents passed away in a tragic accident a few years ago and she has been taking care of her younger sister. The sister has just turned 18 and is about to go to college; yet, Kat’s not even sure how she’s going to pay the mortgage on their tiny condo with her paychecks from her waitressing gig. When Kat is presented with an offer from hot as fuck billionaire, Blake, that could change her (and her sister’s) future, Kat can’t turn it down.

She may play the girlfriend on the outside, but she knows that the second she lets Blake inside of her heart, she’s a goner. Blake doesn’t do love. He doesn’t do feelings. He’s a stoic, impassive, sort of robot – kind of like the ones that he made his billions off creating.

There were parts of this story I absolutely adored – especially when Blake’s eyes showed a little vulnerability or any scene with Meryl, Blake’s mother. I loved that woman with a fierce passion. She’s funny, smart, witty and just plain awesome.

However, there were parts that also faltered for me. Lots of repetition had me skipping over some words and skimming some scenes. And I literally grimaced everytime Kat got turned on and Blake touched her as I was anticipating the phrase “Wow. Wow. Wow.” to fall from her thoughts. Because she thought it. Every. Time. It became a bit much. The ending was also a bit rushed to me – I wished that the author didn’t skip over a very important week I would have loved to read about and then things wrapped up so quickly I almost suffered whiplash.

Notwithstanding those issues, this story will definitely satisfy any billionaire craving. The poor girl makes deal with sexy, rich man trope is a winner for a reason – I just can’t stop myself from loving this stuff and I don’t want to. Despite my hangups (which may bother no one else), I smiled and cringed at the ups and downs, and almost shed a tear at some of the sweeter moments (that’s a big deal for me!). Blake’s a billionaire whose wallet isn’t the only thing I’d like to get into 😉 Sexy and fun, on the whole this baby gets three stars!