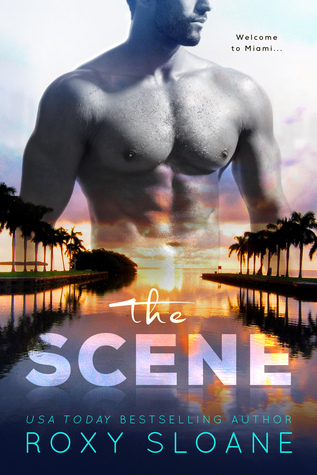 tl;dr recommendation: a quick and delicious story that will make your temperature rise – 5 stars!

Miami. The city of sex, sin — and secrets.

I came here with one mission: solve the mystery behind my brother’s death.
Somebody’s got answers.
Somewhere, I’ll find what I’m looking for.

I didn’t bet on Xavier. He’s my way into the scene — and my biggest threat.
I should keep my distance, but I can’t stay away.

I’m playing with fire, and I just pray I don’t get burned.

Roxy is The Queen of Fast Fucks and she shows us why she reigns supreme in The Scene. If you’re new to the serial novella circuit, get in here and learn from the master.

Overflowing with dirty talk, skinny dipping and decadence, The Scene is a quick and delicious story that will make your temperature rise.

Would you like some suspense with your mind-blowing orgasms? Then you need to get in touch with The Scene and let Xavier work his magic fingers and tongue while traveling through the potential underbelly of a high class drug ring searching for the mystery of Nikki’s brother’s death.

Nikki isn’t prepared for the rush that was in store for her when she moved to Miami. While she’s trying to find out what happened to her brother she’s swept away by Xavier, a billionaire-type alleged playboy who has decided that she’s the one he wants.

I totally wasn’t expecting that cliffhanger to happen in this book….so now I’m sort of at a loss as to how the story will turn. THIS IS A GOOD THING. I’m now ready for anything… please!

tl;dr recommendation: hard, rough and fucking filthy – this angsty installment will leave you right on the edge. 4.5 stars!

The one man I can’t stay away from is the man I swore to destroy.

I came to Miami determined to reveal the truth behind my brother’s death. Now I’ve discovered that Xavier is the crime king running this city — and I’m going to take him down – if I can keep my hands off him long enough to think straight.

I’m in over my head now, but there’s no going back.

The second installment of this fiery hot series is an angsty little bugger. While Nikki and Xavier continue to light Miami on fire with every touch, Nikki carries around bags of emotional ice that she has at the ready, prepared to kill every mood. Nikki isn’t sure what to believe about Xavier…but she also doesn’t ask him. *smh*

Nikki also carries around a ‘jump to conclusions’ mat everywhere she goes. With the least bit of evidence she has already decided that Xavier is a likely a Drug King and killed her brother. EXCUSEY WHAT?! I could have killed her. Hailey gets big high fives from me for being the voice of reason, forcing Nikki to word vomit her weak rationale and pointing out that maybe, just maybe things are what they seem and not what Nikki is making up. In her head. All the points to Hailey!

Xavier is once again a delicious specimen of a man who has (so far) done nothing to make me question his fuckability or desirability as my current book boyfriend. He finger fucks like it’s his job (OH. MAYBE THAT’S WHAT HE DOES FOR A LIVING!) and can incite a stampede of women in heels and short dresses everywhere he goes. He also sends the most fantastic gifts. Nikki, darling, I refuse to question his career aspirations and am more than happy to take him off your hands…

There’s so much sexual tension in this book in addition to the angst that I’m really happy that my kindle doesn’t also double as an etch-a-sketch. I hope you’re in the mood for hard, rough and filthy fucking, because this installment grants you access to one of the dirtiest and hottest sex scenes I’ve read in a long time. THANK YOU, ROXY!

Overall, Part 2 of The Scene gets you all riled up and leaves you (of course) WANTING MORE.  book3!book3!

Review: Caught Up in the Touch by Laura Trentham