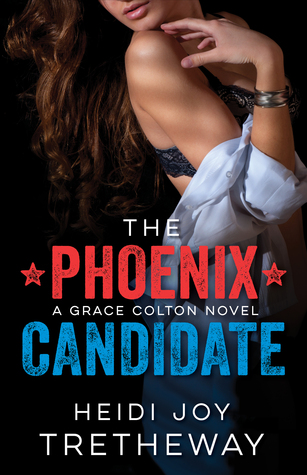 Other Books in Series:
The Phoenix Campaign – released April 2015

tl;dr recommendation: This book has my vote!

U.S. Congresswoman Grace Colton is the most famous woman in politics—and the loneliest—until a drawling, sexy stranger offers her one night: no strings and no regrets. And it rocks her world.

Grace wakes to an empty hotel room and a phone call. The dark horse for the 2016 presidential election, Senator Shep Conover, is considering her as his vice presidential running mate.

Before she can be selected, Grace must be vetted and coached by Shep’s political consultant, Jared Rankin, who already knows too many intimate details about her. He’s Mr. One-Night Stand.

Grace is torn: play nice with Jared to join the senator’s ticket, or play hardball and back the slick frontrunner? As the Democratic National Convention approaches, Grace must decide where her loyalties lie and if she can trust Jared with her future—and her heart.

I don’t know if it’s because I went to a Very Political University and have had a lot of exposure to campaigns, but from the first chapter I was hooked. Sexy, intelligent & oh so hot, Heidi sure knows how to grab a girl off her seat from the very beginning & I loved it! At 39 ,Grace Colton is a little bit older than your average erotica main character, but 1) she needs to be….she’s running for Veep for fucks sake; and 2) with age comes wisdom, sass, and feistiness and Grace has them all!

Grace is a very strong female lead who will not be pushed around – even by Jared (unless, of course, she wants him to push her around…) – and I loved that about her. I was so proud of her when she stood up for what she believes in no matter what the consequences. Jared, on the other hand, is a bit of an engima…is he into Grace? Does he have women in every city he visits? What’s going on with him?! Why won’t he let himself get close to Grace? Keep calm….you find out & you’ll be satisfied at the end of this book. Promise.

Did I mention that this book is fucking hot? WELL, IT IS. I love it when Grace let’s go & stops thinking. I love it when Jared takes control. The sex scenes are utter perfection. Give. Me. More.

I was a little concerned about whether or not I would enjoy a political erotica book. NO NEED TO WORRY. Politics aren’t shoved down your throat & the political views are the characters’ alone, just like if you were watching The West Wing. It’s a story, not a campaign speech.

Also, MAJOR POINTS to Heidi for creating such an awesome villain. I think Lauren’s my new favorite bitch. Super fake, yet sharply intelligent and manipulative. These types of people really are the most dangerous & Lauren was crafted so perfectly!

I so enjoyed this one – really looking forward to The Phoenix Campaign!!