Review: Waiting for the One by L.A. Fiore 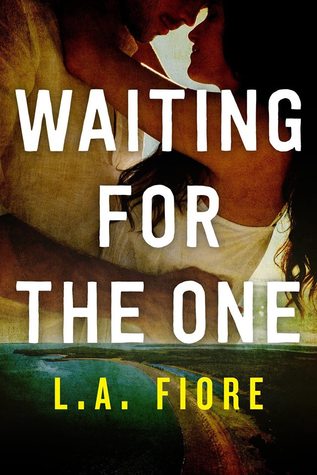 Saffron Mills has lived all of her almost thirty years in Harrington, Maine—a small town where fishing is plenty, but available men are far too few. Yet it’s not just her dating dry spell that draws her to recent arrival Logan MacGowan. Tall, dark, and handsome, with emerald-green eyes and an impossibly hot body, Logan is a gorgeous enigma whose silence she takes for indifference…until one unforgettable chance meeting, when pent-up attraction ignites into the most intense encounter of her life.

In this quiet, quirky town, no one knows that Logan’s alter ego is famous sculptor and tabloid darling David Cambre. In New York, he had all the wrong kind of attention, but in Harrington, he’s found peace, privacy…and Saffron. She’s witty, forthright, and so much sexier and stronger than she knows. But how do you protect the love you’ve been waiting for when your own lifestyle could be destined to rip it apart?

If you’re looking for quirky, fun characters and a sweet HEA, then you’ve found the right book. Saffron is a small town girl who hasn’t had a date in uhhhh, like forever? After a point, you sort of stop counting, right? Anyway, her pickings are slim after she takes into account the male + single + DECENT PERSON calculation. She’s super attracted to Logan, but he won’t talk to her. He’s been in town for six months, he talks to other people, but he won’t. speak. to. Saffron. It’s really infuriating. Logan may dress and act like a yeti/fisherman/lumberjack but his eyes pierce Saffron with such intensity that she knows that there’s something…someone deeper behind the mask. And she’s like a moth to a flame that keeps getting swatted away.Until, of course, she throws a Swordfish funnel cake at his face.

As for Logan…well, he is a masterpiece of a man. While his art is what he was known for, his soul is what truly sets him apart. His devotion and passion for Saffron brought me to my knees, as did his words and over the top gestures. He is most definitely swoon worthy. However, he hates the fame that his art and his face have created for him. He’s desperate to keep Saffron away from the insanity of that life and is willing to do anything – whatever the cost – to make that happen. When all of a sudden a stalker starts to threaten Saffron’s life, Logan takes matters into his own hands.

Note: the festivals in this book are hilarious, quirky, and really make this story a lot of fun to read. I also loved the relationship Saffron has with her surrogate father, Frank. It’s so endearing and heartwarming to watch them connect with each other when neither of them have anyone else who could fill those roles.

Saffron and Logan are on fire together. I could feel the heat and passion that jumped between them as well as the devastation that ran through Saffron during the more intense parts of the book. The only downside about this book is that the story was somewhat predictable at times and the writing itself didn’t always flow as much as I would have liked, but the book was overall really enjoyable. This is a sweet read when you need a swoon worthy hero to sweep you off your feet.